Students travel the world to hone their language skills and develop a sense of cultural awareness and global citizenship. Here are two stories from students' time abroad. 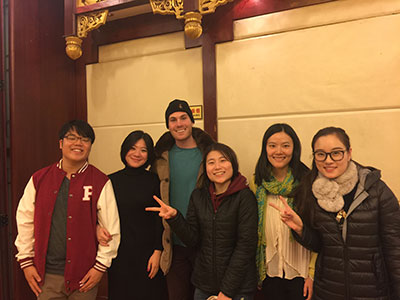 For Jake Kim, his fall semester in Beijing, China was “one of those experiences that you cannot fully describes through words.” When he began studying abroad at prestigious Peking University, he couldn’t even order food at a restaurant in Mandarin. But he met the challenges head-on, and after deeply immersing himself in his semester-long home, he soon found himself carrying on conversations with the people around him.

His passion for the Chinese language was reignited, and he’s brought it back to his studies at Whittier. After he graduates, he plans to return to China to study it further and use it in international trade.

“It was amazing in every aspect,” Jake said.

Stepping out into a Parisian street to start her day, Janelle’s childhood dream had come true. Ever since she was reading and watching stories about Madeline, Janelle became fascinated with French culture and knew one day she would speak its romantic language and find herself in the City of Lights.

Thanks to Whittier, she did both. After practicing her French in class and around the lunch table—Whittier has a bi-weekly meal, La Table Française, where students practice their French over food—Janelle traveled to Paris for a semester abroad. Her French soared there as she lived with a family in the Latin Quarter, made friends at school, and explored the city. She even had adventures in Spain, Italy, Switzerland, and more.

“It truly was an amazing experience,” Janelle said. “I encourage everyone to study abroad if the opportunity presents itself.”

Back at Whittier, Janelle is moving toward her next goal: medical school. Her initial aim is a family practice, though now that she’s trilingual (she also speaks Spanish), Janelle is considering volunteering her expertise to Doctors without Borders.