Sociology education goes beyond the confines of the Whittier College campus.

Here, we know that lessons learned in sociology courses need to be practically applied both for career training as well as civic involvement, and so getting out into the community is crucial for intellectual and character growth. 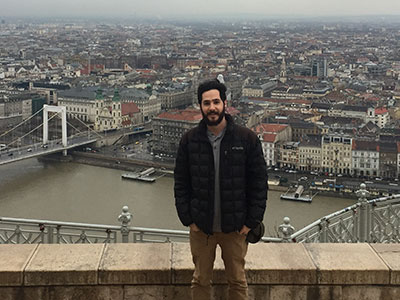 Sociology major Seth Feldman wanted to go off the beaten path and study somewhere that would allow him to travel on weekends. In the heart of Hungary’s beautiful and bustling capitol, Budapest, Seth spent a spring semester studying globalization and political transition. He also got his wish, traveling almost every weekend around Europe, including Italy, Germany, Amsterdam, and more.

The trip not only satisfied his wanderlust, but it also inspired his senior research project: analyzing sentiments toward immigration in Hungary. He’s returning in January for two weeks, earning credits as he gathers more data for the project.

“I’ve always been interested in how people act in relationship to their place and their group in society, and the forces that are outside of ourselves play such a role in who we are and what we do,” Seth said. “Studying those forces and understanding them brings us closer to our experience as human beings. I always thought that was interesting, but didn’t know what sociology was until I got to Whittier.”

Whittier increases access for students to study abroad with the Global Poet Scholarship, which awards $2,000 to every student who studies abroad through the Whittier College Office of International Programs.

The College also offers short-term trips during MayTerm, an optional term in May.

Dozens of Whittier students traveled to the U.S./Mexico border to join a group of nearly 300 volunteers in picking up trash at Border Field State Park.

After a morning of clearing debris, the students spent the afternoon hearing from a speaker at the Tijuana River Estuary Interpretive Center about cross-border environmental problems that afflict the river, including trash buildup and silting. Students also learned about cooperative bi-national solutions being carried out to address these problems.