At Whittier College, students enjoy close, active collaboration with professors and the thrill of seeing their film knowledge and storytelling skills grow. 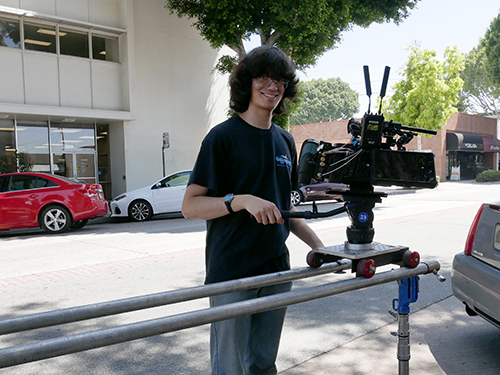 Emerson Little (Class of 2021), who designed his own major through the Whittier Scholars Program that incorporated film studies, produced a science-fiction film, In Another Place, for his senior project. That experimental short film went on to win an award from IndieFEST, and was also selected for inclusion in the Accolade Global Film Competition, an industry leader in virtual film competition.

In addition, Little was one of more than a dozen students and recent Whittier graduates who worked on an independent film, Carlos Through the Tall Grass, both behind and in front of the camera. The indie movie, which was produced by Whittier film faculty and filmed in part near campus, went on to be selected for Los Angeles' biggest independent film festival and will enjoy a world premiere at Hollywood's historic TCL Chinese Theatre.

Having professors working professionally in the film industry is an added, and incredibly important, part of the student experience. At Whittier, students enjoy the benefit of their professors' personal attention and industry knowledge.

Whittier film faculty are excited to nurture a community of students interested in the field of film, laying a foundation of intellectual, creative, and collaborative experiences, and preparing them for the professional industry.