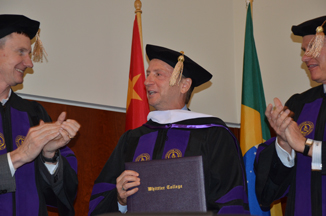 Social-networking pioneer and philanthropist David Bohnett will give a special lecture, Practicing the Liberal Arts in Daily Life, at Whittier College on Thursday, November 1 at 5:30 p.m. in A.J. Villalobos Hall, 7214 Painter Avenue, Whittier, CA 90608, and will receive an honorary doctorate of humane letters (L.H.D.) from the College. During his visit to campus, he will also meet with an international business class; tour the College, and participating in a session with LGBT student leaders and the Gender Justice Coalition.

David Bohnett is a philanthropist and technology entrepreneur committed to effecting positive change through community building and social activism. In addition to serving as Chair of the David Bohnett Foundation (DBF), he is Chairman of the Board of the Los Angeles Philharmonic Association and Trustee of the John F. Kennedy Center for the Performing Arts, amfAR (The Foundation for AIDS Research) and the Los Angeles County Museum of Art (LACMA).

Since 1999, the DBF has provided funding, state-of-the-art technology and technical support to hundreds of innovative organizations and institutions in several primary funding areas: The Fund for Los Angeles, supporting a broad spectrum of arts, educational and civic programs including the Los Angeles Philharmonic, LACMA and the Venice Family Clinic; LGBT-related causes; graduate school leadership programs at the University of Michigan, UCLA, NYU and Harvard; voting rights and registration initiatives; supporting research and public policies to reduce the toll of firearm violence; and animal research and rights.
Grants totaling nearly $50 million to date have supported the work of a wide range of organizations including the Brady Center to Prevent Gun Violence, The Wildlife Alliance, the ACLU Foundation, Equality California, and the David Bohnett Gay & Lesbian Leadership Fellows program at Harvard University's Kennedy School of Government. The David Bohnett CyberCenters are another major undertaking—currently at 63 LGBT centers nationwide, they offer business, educational, research, and recreational opportunities to the local gay and lesbian community via access to the Internet.

In his professional career, Bohnett has long been a leader in the technology and information services industry, and he is founder and managing member of the early stage technology fund, Baroda Ventures. He is also Chairman of OVGuide.com, the Internet's most comprehensive guide to online video, including TV shows, movies, user-generated content and video games. The site currently draws over 1 million users a day and upwards of 16 million unique users monthly.

In keeping with his approach to philanthropy, Bohnett has always been involved with businesses that empower individuals, improve lives and build viable communities by connecting like-minded people. In 1994, he founded GeoCities.com, a media and e-commerce company that was once ranked one of the four most trafficked sites on the Web. GeoCities became publicly traded on NASDAQ and was acquired by Yahoo! Inc. in 1999. In a 2007 article, the Wall Street Journal described it as a Facebook prototype and noted, "Back then, entries were known as home pages, not profiles. But the basic, expressive elements of today's Facebook and competitor MySpace ... were all right there."

Previously, Bohnett has been an active partner in Xdrive.com, Wireimage.com, Stamps.com and LowerMyBills.com, and held various positions in the software industry for Legent and Goal Systems. He started his career as a staff consultant with Accenture (then Anderson Consulting) in Los Angeles. His academic credentials include an M.B.A in Finance from the University of Michigan and a B.S. in Business Administration from the University of Southern California.

Bohnett's many awards and distinctions include Los Angeles Business Journal's Technology Leader of the Year, Time Digital's Top 50 Cyber Elite, and Entrepreneur of the Year for Southern California.