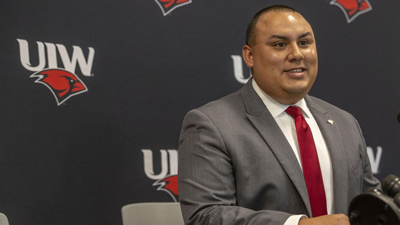 Richard Duran ’11 has been named the new athletic director at the University of the Incarnate Word (UIW) in San Antonio, Texas.

The former Poet football player served in the interim role at UIW for 10 months before being elevated to the permanent position. In his permanent role, Duran becomes the youngest sitting Division I athletic director, according to the announcement on the University’s athletic website. He is also one of 10 Latinx athletic directors at that level, as stated in an article in the San Antonio Express News.

A native of Montebello, Calif. and a first-generation college graduate, Duran told the newspaper that helping future generations of student-athletes follow a similar path at UIW is a “blessing.”

Duran arrived at UIW after a year and a half as the director of development at California State University, Los Angeles. Prior to that, he spent three years at the University of Louisiana, Monroe (ULM) where he started as the director of marketing and event management before being promoted to the assistant athletics director of external relations.

Duran went to ULM after a stint as the assistant director of athletics development at the University of California, Riverside. He began his career in intercollegiate athletics with the Big West Conference as a championships/marketing assistant.

Duran was a four-year letter winner in football at Whittier College. He graduated with distinction, earning a bachelor’s degree in kinesiology with an emphasis in sport management. In 2013, he received a master’s degree in sport management from the University of San Francisco. He is currently pursuing his doctorate and working on his dissertation at Louisiana Tech University.