Senator George Mitchell to Speak at Whittier College: The Implications of the Arab Spring for Peace in the Middle East 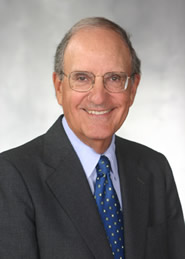 Former Senate Majority Leader George J. Mitchell, who served as U.S. Special Envoy for Middle East Peace in the Obama Administration, will be the 2012 Feinberg Lecture speaker on Tuesday, February 28 at 7:30 p.m. in the Ruth B. Shannon Center for the Performing Arts, 13406 Philadelphia Street, Whittier, CA 90608. Mitchell's lecture, The Implications of the Arab Spring for Peace in the Middle East, will deal with timely current issues related to Arab states. The lecture is free and open to the public, but seating is limited and reservations are required. For more information or to RSVP please call Terrie Valenzuela 562.907.4219.

Most recently Mitchell served as U.S. Special Envoy for Middle East Peace from January 2009 to May 2011. Prior to this, he has had a distinguished career in public service spanning three decades.

Mitchell served on the Senate for 15 years, enjoying bipartisan respect during his tenure. He was Senate Majority Leader from 1989 to 1995. While in this role, Mitchell led the movement to reauthorize the Clean Air Act in 1990 and pass the Americans with Disabilities Act of 1990. Additionally, under his leadership, the Senate approved the North American Free Trade Agreement and the formation of the World Trade Organization.

In 1995, he served as a Special Advisor to President Clinton on Ireland, and from 1996 to 2000 he served as the Independent Chairman of the Northern Ireland Peace Talks. Under his leadership the Good Friday Agreement, an historic accord ending decades of conflict, was agreed to by the governments of Ireland and the United Kingdom and the political parties of Northern Ireland. For his service in Northern Ireland Senator Mitchell received numerous awards and honors, including the Presidential Medal of Freedom, the highest civilian honor given by the U.S. Government; the Philadelphia Liberty Medal; the Truman Institute Peace Prize; and the United Nations (UNESCO) Peace Prize.

In 2000 and 2001, at the request of President Clinton, Prime Minister Barak, and Chairman Arafat, Senator Mitchell served as Chairman of an International Fact-Finding Committee on violence in the Middle East. The Committee's recommendation, widely known as The Mitchell Report, was endorsed by the Bush Administration, the European Union, and by many other governments.

In 2006 and 2007 he led the investigation into the use of performance enhancing drugs in Major League Baseball. He also served as Chairman of the Special Commission Investigating Allegations of Impropriety in the Bidding Process for the Olympic Games; and was the Independent Overseer of the American Red Cross Liberty Fund, which provided relief for September 11 attack victims and their families.

In 2008 Time Magazine named Senator Mitchell one of the 100 most influential persons in the world.

Sen. Mitchell is the author of four books. With his colleague, Sen. Bill Cohen of Maine, he wrote Men of Zeal, describing the Iran-Contra investigation. In 1990, Sen. Mitchell wrote, World on Fire, describing the threat of the greenhouse effect and recommending steps to curb it. His next book, published in 1997, was Not For America Alone: The Triumph of Democracy and The Fall of Communism. In 1999, Sen. Mitchell wrote Making Peace, an account of his experience in Northern Ireland.

The Feinberg Lecture Series is made possible through an endowment established by the late Sheldon Feinberg, a former trustee of Whittier College, and his wife, Betty, in order to invite major scholars to the College to discuss broad historic, religious, and political issues encompassed by Judaism and its role in a changing world. Previous Feinberg Lecturers include U.S. Ambassador to Israel and Egypt Daniel C. Kurtzer, Dr. Judea Pearl, Justice Richard Goldstone, radio talk show host and author Dennis Prager; John Loftus, prosecutor of Nazi criminals; Seymour Martin Lipsetp; John Rothmann, KGO talk show host; and Rodger Kamenetz, author of the national bestseller The Jew in the Lotus.

Senator George Mitchell to Speak at Whittier College: The Implications of the Arab Spring for Peace in the Middle East