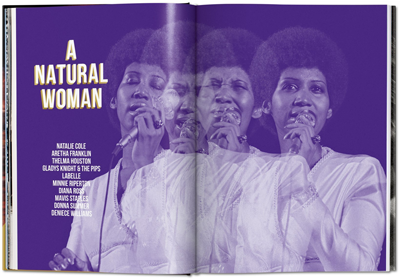 His intimate photographs of legends like Marvin Gaye, Aretha Franklin, James Brown, and the Jackson 5 (to name a few) are the subject of a new book, Bruce W. Talamon: Soul. R&B. Funk. Photographs 1972-1982.

This collection of largely unseen photographs will be the first of its kind to focus on the golden age of soul, and highlight the deep impact of black entertainers on American culture.

Talamon was a law school-minded political science major at Whittier College when he began to chronicle the world of soul through his camera lens. Though he had never planned to pursue the arts and had scarcely mastered the art of photography, his inexperience didn’t hold him back from capturing stunning shots of soul, R&B, and funk icons when he went to see them perform. In 1972, his raw, human depictions of black musicians merited him a job at Soul, a major black-owned newspaper spotlighting African American entertainers.

From that moment on, Talamon had personal access to the brightest stars in the soul music scene, and whether he was on tour with Labelle, relaxing backstage in Al Green’s dressing room, chatting with Stevie Wonder over a late-night meal, or spending a week with Marvin Gaye and his family, he spent his young life immersed in the world of music.

Talamon closely documented an era which was a crucial turning point for both music and black culture in America, and he did so with honesty and intimacy unheard of in the modern popular music industry. Bruce W. Talamon: Soul. R&B. Funk. Photographs 1972-1982 is a rare inside look at the human beings behind the music.

Read more in the New York Times and The Guardian.