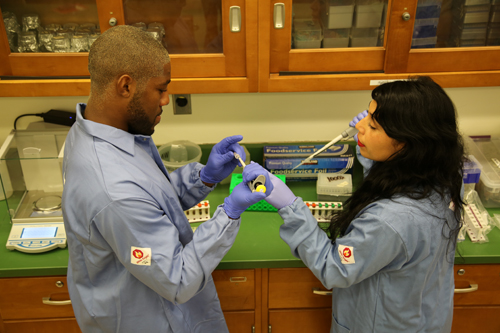 Since the intentional distribution of anthrax spores (Bacillus anthracis) through the U.S. postal system in 2001, the prospect of bioterrorism in food, water, and agriculture has identified critical needs in prevention, protection, and mitigation for homeland security.

Responding to this need, the Department of Homeland Security (DHS) has awarded Whittier College Professor of Biology Sylvia Vetrone a $119,000 grant to conduct research on innovative ways to detect biological or chemical agents in food. Vetrone is one of 13 researchers nationwide to receive such funding this year.

The DHS grant is the second for Vetrone, and will serve to support the continued collaborative efforts between Vetrone and Dr. Evangelyn Alocilja from the Department of Biosystems and Agricultural Engineering at Michigan State University, who developed the biosensor in 2009.  In addition, senior biology major Masson Blow ’15, will also be supported by this new grant to work on the project as an undergraduate research assistant.  Vetrone and Alocilja first began working together on this project in the summer of 2010, and they hope that after the completion of the validation of the DNA-based biosensor to detect both intentional and unintentional food pathogens within liquid and solid food matrices, they can transition it towards a prototype for commercialization.

“We recently demonstrated that our DNA-based biosensors, which utilize gold nanoparticles for signal amplification and magnetic nanoparticles for easy and clean separation from samples, can detect the non-PCR (polymerase chain reaction) amplified genomic DNA of the bacterial foodborne pathogen Salmonella,” said Vetrone.

PCR is a commonly used molecular biology tool for amplifying DNA. But, Vetrone’s system does away with the need for this step.

“What makes our biosensor really unique is that it does not require DNA amplification. It is also semi-quantitative in nature, which can reveal specific amounts of a detected agent, and it only takes about six hours to achieve detection."

Currently, all other commercially available DNA-based systems are not quantitative, require DNA amplification, and can take anywhere from 12-72 hours.

Another distinctive element of Vetrone’s DNA-based biosensor is its potential usefulness on the field. Since the testing system does not require a full laboratory, it could easily be used in a field resource-limited setting. Moreover, the samples are inexpensive to run, making it cost-effective.

While the team is using a less toxic agent like Salmonella for this test, the biosensor can be modified to detect bioterrorism agents such as anthrax, botulism, or O157: H7 E. Coli.

“Our previous studies demonstrated that the biosensor can detect pathogenic DNA in liquids, the next step is to test its ability in solids,” said Vetrone. “After this work is completed it can then be moved toward prototype development.”