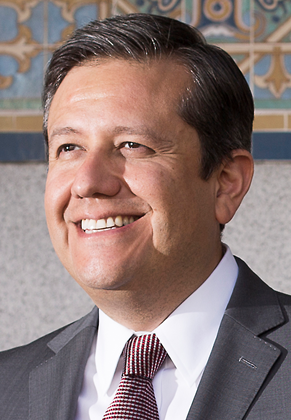 Los Angeles City Administrative Officer (CAO) Miguel Santana ’91 will be the keynote speaker for Whittier College’s Latino Graduates Celebration on Saturday, May 7 in the Ruth B. Shannon Center for the Performing Arts at 4 p.m. Whittier’s Latino Graduates Celebration is a bilingual ceremony sponsored by the Ortiz Programs, Latino student associations on campus, and the Associated Students of Whittier College Senate to celebrate the academic success and achievement of Whittier students.

Miguel Santana has been the CAO for the City of Los Angeles since 2009 and reports directly to Mayor Eric Garcetti and the City Council. His office has direct oversight over the City’s $8.1 billion budget, labor negotiations, debt management and major policy issues as directed by the Mayor and/or City Council, including the proprietary departments of Department of Water and Power, Airport and Harbor.

Santana recently led the City of Los Angeles’ effort to develop the City’s Comprehensive Homeless Strategy, adopted on February 9, 2016, which identifies 64 Strategies that address a broad spectrum of approaches, including housing, supportive services, homeless prevention, and governance issues.  It represents a shared approach of system-wide change with mutual responsibility and aligned goals between the City and County of Los Angeles.  And, it is a comprehensive approach to address homelessness in the short-term and long-term.

Santana has more than 25 years of experience managing numerous fiscal, legislative, political, and community issues. Prior to this position, Santana served as one of five Deputy Chief Executive Officers for Los Angeles County. As deputy CEO, Santana provided oversight to all of the County’s social service departments including the Department of Children and Family Services, Public Social Services, Child Support, Military and Veterans Affairs and the Human Relations Commission. Collectively, these departments represented $9 billion of the $22 billion annual County budget.

While a student at Whittier College, Santana helped run the Whittier-Area Ecumenical Rotating Homeless Shelter, an emergency shelter for the homeless. After graduating, Santana worked for the Mexican American Legal Defense and Education Fund (MALDEF) as it responded to the Los Angeles civil unrest in the early 1990’s.  A year later, he became an aide to Los Angeles County Supervisor Gloria Molina, working his way up to chief of staff.

Founded in 1887, Whittier College is an independent four-year residential liberal arts college that encourages students to question the world around them and figure out their place in it. Located in the heart of Southern California between bustling Los Angeles and beautiful Orange County, Whittier is distinguished by its small size, energetic faculty, and nationally recognized curriculum. With an emphasis on diversity, community, and curricular innovation, the College’s primary mission is to endow students with the education, skills, and values appropriate for global leadership and service. Whittier College is a designated Hispanic-Serving Institution (HSI and a member of Hispanic Association of Colleges and Universities) and an Asian American and Native American Pacific Islander-Serving Institution.